It is my pleasure today to host my very first guest blogger here at Out on a Limb, Anne E. Johnson. If you know Anne, you've likely been awed by the whirlwind success she's enjoyed lately. This summer marked the release of her noir sci fi novel for adults, Green Light Delivery (Candlemark & Gleam), as well as the release of her tween paranormal mystery, Ebenezer's Locker (MuseItUp Publishing), and now the launch of her tween medieval mystery, Trouble at the Scriptorium (Royal Fireworks.) See what I mean - whirlwind success! 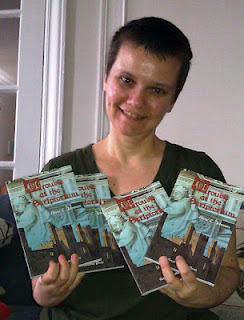 Trouble at the Scriptorium

Synopsis: Harley is a twelve-year-old servant boy at a castle north of London in the thirteenth century. Lady Margaret, also twelve, is the daughter of the castle's lord. Together they must puzzle out a message hidden
in a book of Gregorian chant. There's something very suspicious going on at the scriptorium where the book was made, and people's lives are in danger!

The Magic of Reality

I wrote Trouble at the Scriptorium for two main reasons:
1) I have a master’s degree in medieval music, and I wanted to share some of that fascinating information with kids by presenting it in a fun, exciting story.
2) It was the height of Harry Potter obsession (about four years ago), and I was tired of “medievalist” ideas always being presented as fantasy.
And so, I plunged into my first historical novel. I decided to set it in 13th-century England. I invented a protagonist, a twelve-year-old servant boy named Harley, who lives in a castle north of London. He needed to have a natural interest in music (his father’s a jester and his uncle is the choirmaster at a monastery), but not be a musician himself, so he could learn along with the reader.
I had no idea how to write a mystery, but I knew I wanted to focus on Gregorian chant. The crafting of books is a wonderful topic, so I combined those two ideas: Harley discovers that a newly-made book of Gregorian chant has one of its painted illuminations missing.
At first, Harley assumes this is a most unfortunate error, but he’s especially concerned about it because the book is a name-day present for the lady of his castle. (A “name day” was the special feast day for the saint a person was named after; this tradition is still practiced in some parts of the world.)
Lady Ursula has also just had her family jewels stolen, so she’s already upset. This makes Harley desperate to cover up or fix the problem with the chant book. But the more he learns about the book, the more problems he discovers in it. Eventually he realizes it contains a hidden message, which he cracks with the help of Lady Ursula’s beautiful, brilliant daughter, Lady Margaret.
I tried to make Trouble at the Scriptorium accurate and detailed, yet also an entertaining mystery that would appeal to intelligent kids. Creating it inspired me to continue writing historical fiction specifically for the middle-grade market (I’ve already written a sequel to Trouble at the Scriptorium!). I enjoy the special challenges it offers.
* * * 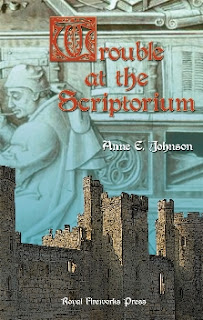 Here are some fun links about Harley's world.

You can learn more about Anne E. Johnson at her website.
For updates on Anne’s publications and appearances, like her Facebook author page.
You can buy Trouble at the Scriptorium directly from Royal Fireworks Press.
This just in: Anne has signed a contract for the sequel to Trouble at the Scriptorium! Harley and Lady Margeret have another adventure in their future: The London Hurdy Gurdy.

Posted by Ruth Schiffmann at 11:00 PM