That Sadie Thing
and other stories
by Annalisa Crawford

That Sadie Thing is a collection of award-winning short stories that captivated me from the first page. Even now, a week later, several of the characters linger with me and I find myself thinking of them throughout the day. I’ve been intending to read Annalisa's work for some time. I’m glad I finally dove into this. I expected to read a story here or there, as is easy to do with a collection of shorts, yet once I began, I didn't stop reading until I reached the end. The author has a beautiful way with words and is a keen observer of people and how we relate to one another. Her stories surprised, soothed, and brought me to tears.

Destroy Me
by Tahereh Mafi

In my last post I told you all how much I enjoyed Tahereh Mafi’s Shatter Me and Unravel Me. My daughter had the novella, Destroy Me, which was released between these two books, on her Kindle. So, still on the Shatter Me high, I read it. Meh. I’m thinking that these types of novellas serve a purpose, and if I were anxiously waiting for the release of Unravel Me, I would have probably been hungry for any continuation of the story I could get my hands on in the interim. But since I didn’t start the series until the first two books were already available, there wasn’t much point in Destroy Me. It’s told from the antagonist’s point of view so it lacks the poetic flow of Juliette’s stream-of-consciousness narrative, and just kind of fell flat for me. But there is a revelation or two, and I do feel I know the antagonist a little better for having read it. 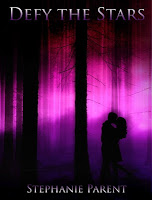 Defy the Stars
by Stephanie Parent

Defy the Stars by Stephanie Parent is a YA novel told in free verse. My daughter raved about this one when she read it a while back. I don’t know what took me so long to get to it. Once I started, I was reading like a fiend. I got nothing done for two days and I may have snarled at my husband more than once when he tried to talk to me. Yes, it was that good!
(And Yay, I finally have one book toward my Novels In Verse Reading Challenge goal!)

Posted by Ruth Schiffmann at 10:15 PM