After a week of distractions, I am back at work on my latest projects - dividing my time between novel and PB. As much as I enjoyed all the M&Ms and YouTube videos, it does feel good to be productive again! As promised, here are a few reviews.

Cath is a Simon Snow fan.
Okay, the whole world is a Simon Snow fan . . .But for Cath, being a fan is her life — and she’s really good at it. She and her twin sister, Wren, ensconced themselves in the Simon Snow series when they were just kids; it’s what got them through their mother leaving.Reading. Rereading. Hanging out in Simon Snow forums, writing Simon Snow fan fiction, dressing up like the characters for every movie premiere.Cath’s sister has mostly grown away from fandom, but Cath can’t let go. She doesn’t want to.Now that they’re going to college, Wren has told Cath she doesn’t want to be roommates. Cath is on her own, completely outside of her comfort zone. She’s got a surly roommate with a charming, always-around boyfriend, a fiction-writing professor who thinks fan fiction is the end of the civilized world, a handsome classmate who only wants to talk about words . . . And she can’t stop worrying about her dad, who’s loving and fragile and has never really been alone.For Cath, the question is: Can she do this?Can she make it without Wren holding her hand? Is she ready to start living her own life? Writing her own stories?And does she even want to move on if it means leaving Simon Snow behind?

At BookExpo America in May I heard Rainbow Rowell read an excerpt from Fangirl and I was sold. I waited in line for over an hour to get my hands on an ARC. It was so worth it! I love, love, love this book. The dialogue is smart, fun, and real. The setting, for the most part, is the college dorm, but I liked that the author didn't use that as a reason to eliminate parents from the story. Cath and Wren's dad is a great character and although it's complicated, I enjoyed the relationship they have with him.

I had heard lots of good stuff about Ms. Rowell's previous YA novel but hadn't gotten to it yet. The minute I finished Fangirl, I headed to the library to get Eleanor & Park, (which I also adored.)

Seventeen-year-old Julien is a romantic—he loves spending his free time at the museum poring over the great works of the Impressionists. But one night, a peach falls out of a Cezanne, Degas ballerinas dance across the floor, and Julien is not hallucinating.The art is reacting to a curse that trapped a beautiful girl, Clio, in a painting forever. Julien has a chance to free Clio and he can't help but fall in love with her. But love is a curse in its own right. And soon paintings begin to bleed and disappear. Together Julien and Clio must save the world's greatest art . . . at the expense of the greatest love they've ever known.
This one was also on my BEA wish list. I stopped back at the Bloomsbury booth at least a half dozen times before I finally got a copy. Sadly, it was hugely disappointing. I didn't care about any of the characters. There seemed to be odd things thrown into the story just for the sake of being odd. The friend with a carousel in his living room--really? The story was set in Paris, but even the setting felt flat. I was so underwhelmed that I didn't finish--and I don't do that often. I'll be passing my copy along and I hope the next reader gets more enjoyment from it than I did.

Luchi Ann only knows a few things about herself: she was born in a prison in Thailand. Her American mother was an inmate there. And now that her mother has died, Luchi must leave the only place she's ever known and set out into the world. Neither at home as a Thai, because of her fair skin and blond hair, nor as a foreigner, because of her knowledge of Thai life and traditions, Luchi feels as though she belongs nowhere. But as she embarks on an amazing adventure-a journey spanning continents and customs, harrowing danger and exhilarating experiences-she will find the family, and the home, she's always dreamed of. Weaving intricate elements of traditional Thailand into a modern-day fairy tale unique unto itself, Nowhere Girl is a beautifully rendered story of courage, resilience, and finding the one place where you truly belong.

This has been on my list for a long time but when I heard that Ms. Paquette was going to be at our local bookstore a few weeks ago, I rushed out to the library to get it. My hope was to buy a copy at the bookstore the day of the event and get it signed. Sadly, there wasn't a copy to be found that day. (She was there to promote her more recent books.) Anyway, I love everything about this book. (That cover!) For all of the physical challenges Luchi Ann is faced with, the story is equally about her inner growth. The author does an amazing job of getting the reader to feel what Luchi Ann feels, dread what she dreads, and hope for what she hopes for.

THE MONSTORE By Tara Lazar, Illustrated by James Burke
From Goodreads:
. 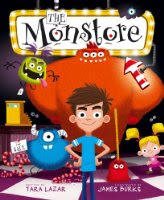 At the back of Frankensweet’s Candy Shoppe, under the last box of sour gumballs, there’s a trapdoor.Knock five times fast, hand over the bag of squirmy worms, and you can crawl inside The Monstore.
The Monstore is the place to go for all of your monsterly needs. Which is perfect, since Zack definitely has a monsterly need. The problem? His pesky little sister, Gracie, who never pays attention to that “Keep Out” sign on Zack’s door—the one he has made especially for her.
But when Zack’s monsters don’t exactly work as planned, he soon finds out that the Monstore has a few rules: No Refunds. No exchanges. No exceptions

I have been trying to get my hands on Tara Lazar's The Monstore since it released in June. The first attempt through inter-library loan was met with the message that none of the libraries were willing to loan out their copy. Which is great--must be popular, right?! But not so great for me. The second attempt was more successful. Persistence does pay off.

This is such a fun story. I love the gorgeous, vivid illustrations, and the smart ending. It's a great story all around. When I showed the book to my (adult) daughter, she read the first page and said, "I already like it." So of course, I added those opening sentences to my list of great story openers, then I rushed the book back to the library, so as not to keep it out of the hands of eager young readers. 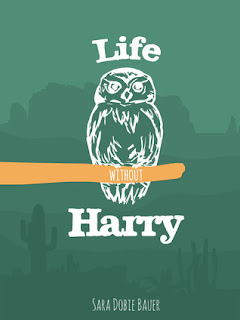 Next up on my TBR list is Sara Dobie Bauer's first novel, Life Without Harry. Find out what it's about, why she's giving it away, and request your own copy here.


Posted by Ruth Schiffmann at 7:08 PM